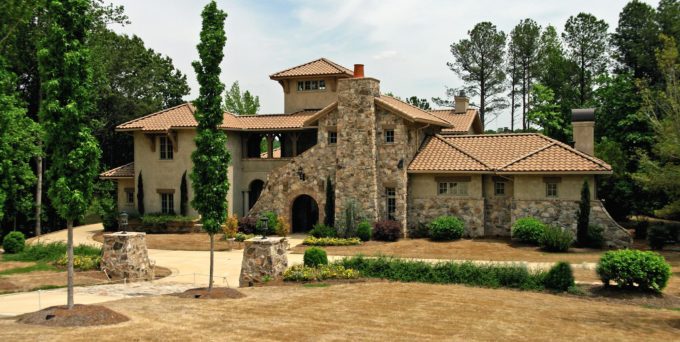 Winemaking – an artisanal tradition entwined with thousands of years of history.  In old-world regions such as Bordeaux, the Rhone Valley, and Tuscany, many vineyards have been operated by the same family for dozens of generations. In these traditional wine regions, winemakers pass down their love of viticulture to their children, along with their heirloom farmhouses and passion to produce superb wines. This infatuation with a craft, specifically in Tuscany, Italy, inspired Casa Lucca, a lakeside villa built by Bost Custom Homes. Like small batch winemaking, designing and building Casa Lucca was a labor of love.

Located on a pristine lake north of Wake Forest, many facets of this home were intentionally designed to reflect the centuries old farmhouses that are ubiquitous among the picturesque hills of central Italy. A 10-day field trip to Lucca, Italy was had by the builder team lead, by Rex Bost, to absorb the bona fide thing. An authentic representation ensued in Casa Lucca. 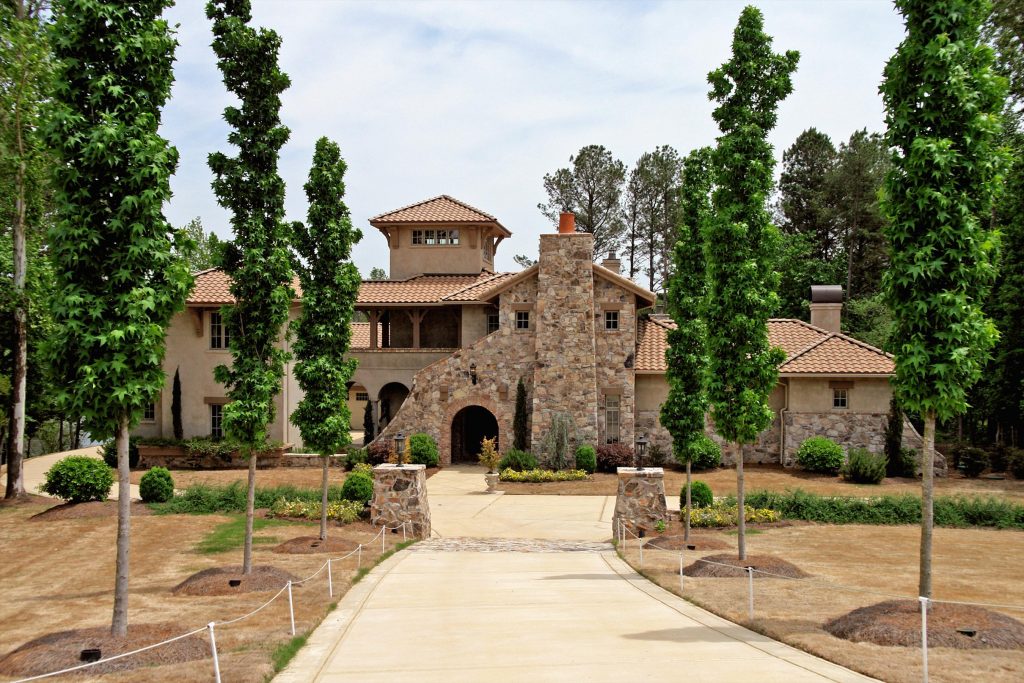 Tuscan villas were often built over decades, with masonry walls and roof sections that were added on to the initial structure years later. Due to resource constraints, these walls often contain varying stone qualities, bricks, tile, and other materials, which add to their old-world look. In building Casa Lucca, we sourced an unwieldy stone from Pennsylvania and taught a masonry team how to lay it with mortar comprised of inconsistent sands and aggregates, smearing the mortar around the joints to give it a “built by a farmer” look. Mixed in with the stone are handmade bricks from a mid-19th century factory in Tarboro, NC. These reclaimed bricks also form archways and accent walls inside the grand halls of the villa. Sections of the masonry were temporarily cured incomplete, so that when finished there would be a “seam” between sections. Like a Tuscan wine, Casa Lucca was built to age gracefully, with solid masonry walls, sealed crawlspace and attics, and a durable barrel tile roof to boot. 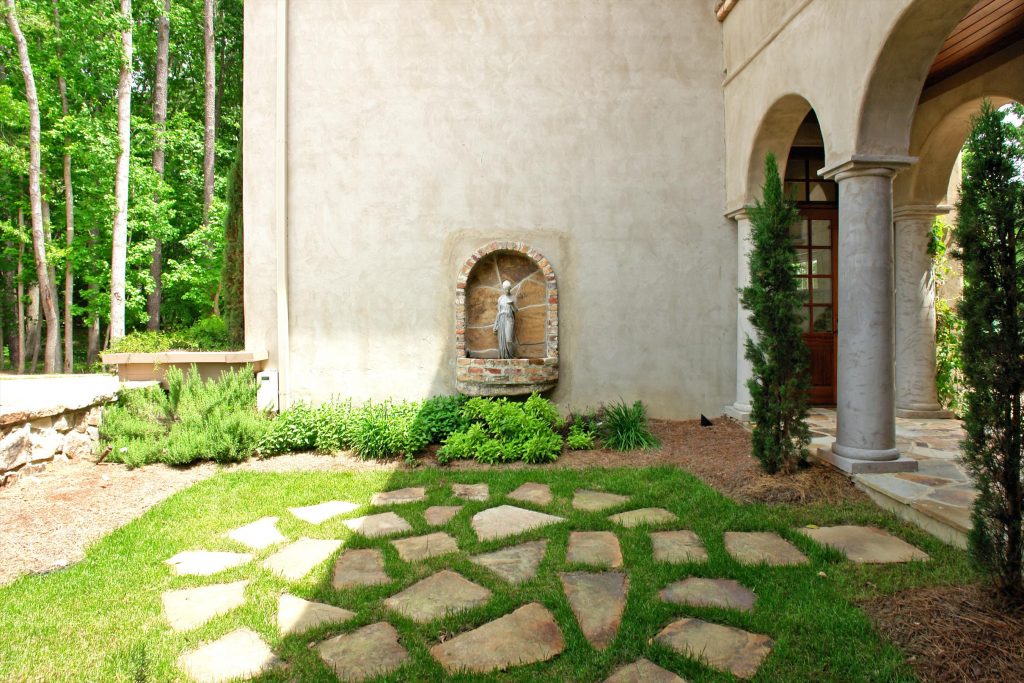 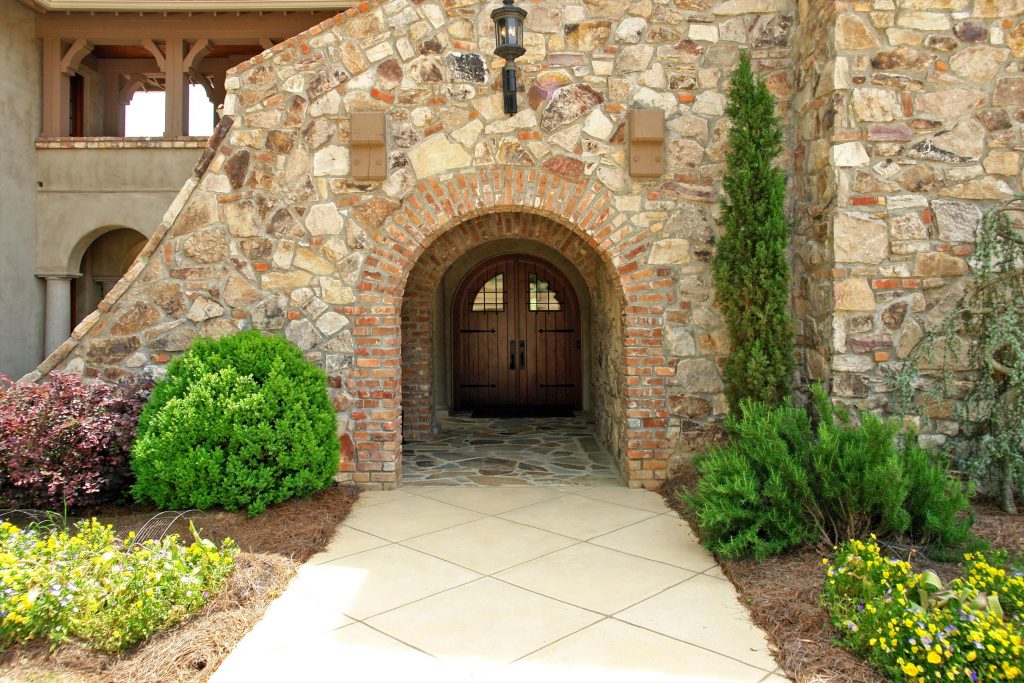 Upon stepping through the archtop front doorway, rugged 150-year-old reclaimed beams from a warehouse in Georgia float overhead, alongside locally sourced southern yellow pine trim and 3” stout stair treads of Chatham County heart pine. “It was important for us to source local, reclaimed materials not only to achieve the authentic Tuscan farmhouse feel, but to reduce our burden on virgin resources shipped from thousands of miles away, and to utilize quality materials that would otherwise go to landfills.” recalls Rex Bost, who adds, “When we were in Tuscany we were captivated by the mystique of the 400 – 600-year-old villas and the hard work and creativity that had been poured into them over the centuries. Many details we saw there were recreated in Casa Lucca.”

One example is the powder room on the central hall. We photographed a bath in Italy and modeled it here, which is distinguished by a stair-stepped arched recess that holds the vanity mirror. The walls are plastered to achieve an antique look, with painted roman numerals marking the completion year. Using technology that was commonplace in ancient Italy, Casa Lucca includes a rainwater harvesting cistern that is used for irrigation and toilet flushing, so the toilet here flushes water from the gutters. 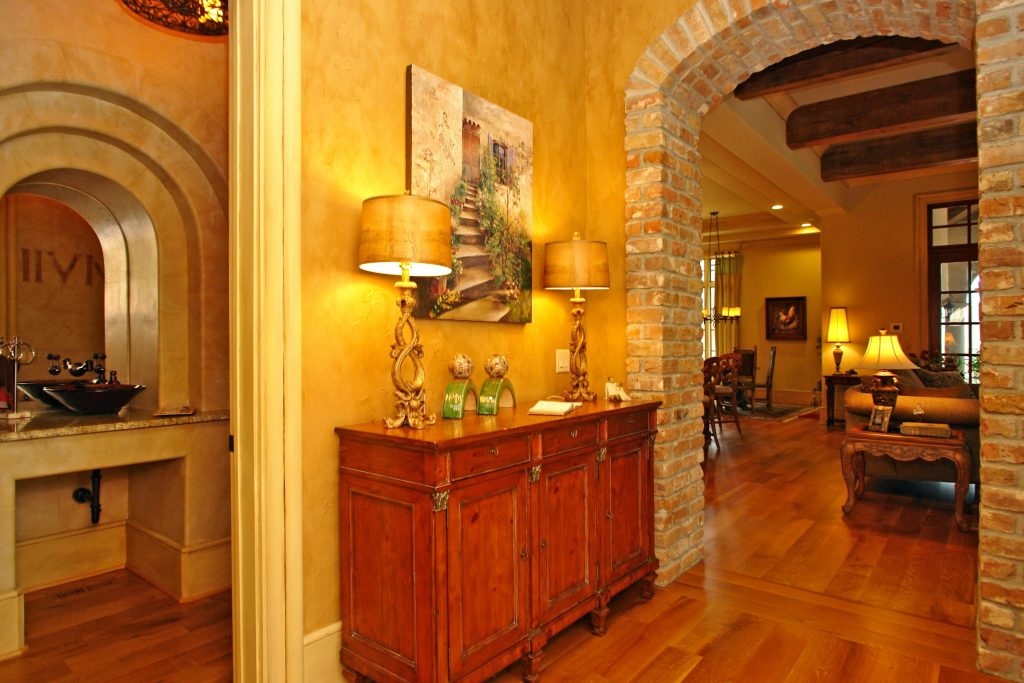 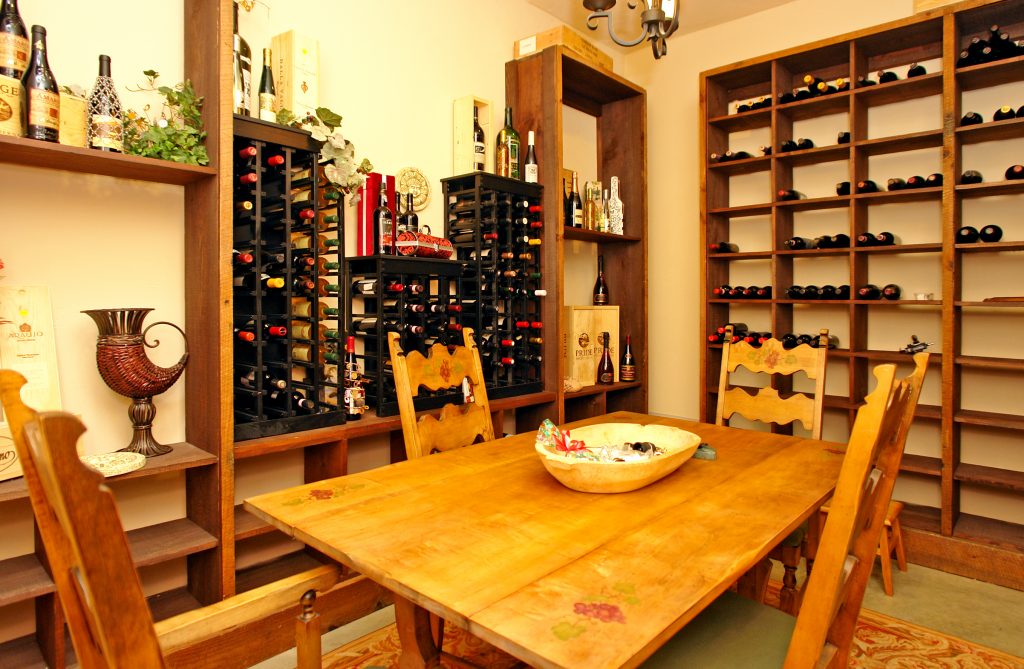 Throughout the estate, love for craftsmanship is evident; from the subterranean wine cellar and tasting room straight out of Tuscany, the 3rd floor cupola observatory with tongue and groove wood ceiling and 360° lake views, the stately master bath with a free-standing copper tub, and the lavish pool lounge draped with stucco arches and fountains. This Tuscan beauty has potentially centuries of la dolce vita ahead, and we hope that one day in the future someone will gather inspiration from it to design their Casa dei Sogni! 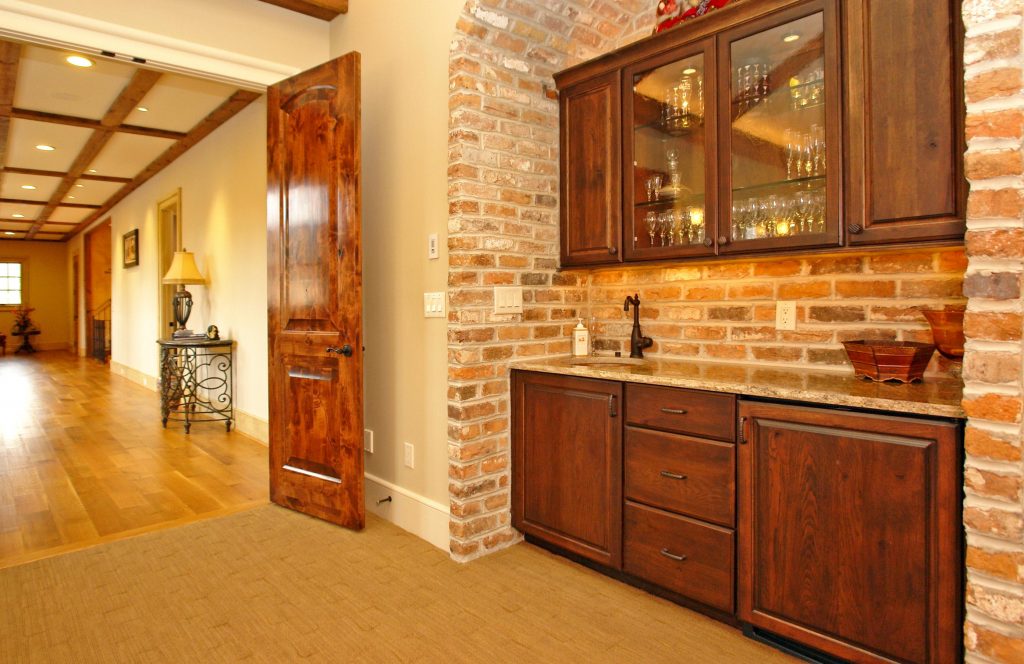 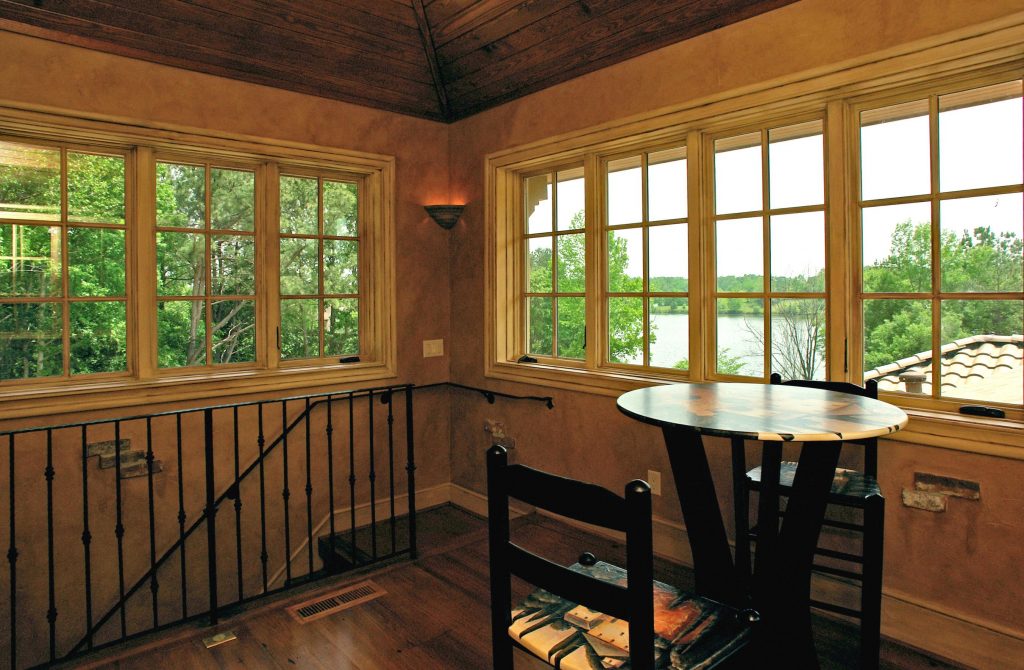 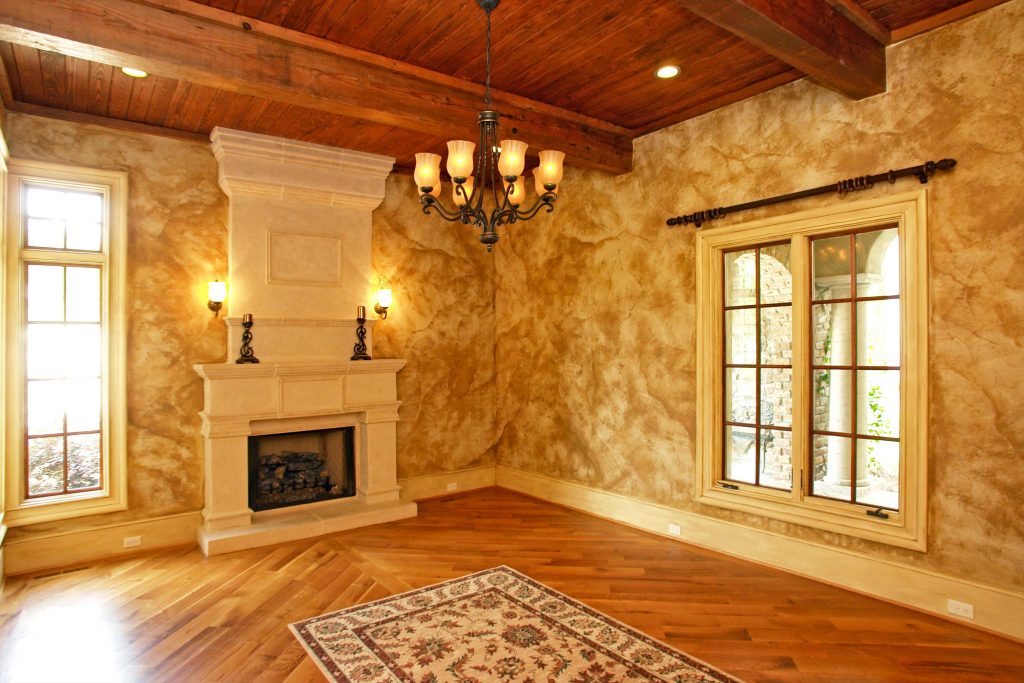